The Park of the Three Souls

Slow Walkways “The journey is the reward” Three main paths through the area, represent the three parts of the soul: The function of the logistikon is to gently rule through the love of learning. The function of the thymoeides is to obey the directions of the logistikon while ferociously defending the whole from external invasion and internal disorder. The function of the epithymetikon is to produce and seek pleasure, often being linked to the love of money. Whether in a city or an individual, injustice is the contrary state of the whole, often taking the specific form in which the spirited listens instead to the appetitive, while they together either ignore the logical entirely or employ it in their pursuits of pleasure. The trilogy of paths can be walked in both directions, from Licusati, which can be interpreted as the ‘individual’ direction, or from San Giovanni di Piro, which represents the perspective of the society. The path of logical, spirited and appetite all pass their own Jazzi, which serves as a minimalist micro museum of these concepts. They can be continued either all the way through the site or short cut to the Jazzi of Justice, containing things in balance. All of the walkways can have one common stop at the Punta Monte Bulgheria. No matter which walkway we choose, we can reach the same point, finding balance and happiness. This walkway is established for reaching equilibrium in between the soul’s components (Justice – J4) and climbing on the top of the mountain, which represents Mental Happiness. Approaching the top of the mountain, they are remote from society, close to nature (mountain and sea) and the universe (sky) or the ‘ONE’ as described by Plotinus. – The logical walkway will be disrupted with logic challenges to overcome. – The spirited walkway will be disrupted with physical challenges to overcome. – The Appetite Soul walkway contains more than one entrance, signs are basing on intuition of the traveler and his own feelings. Distractions of visual beauty, sounds and curiosities will influence the hiker. Regenerating Jazzi: The Jazzi symbolize different human soul’s components. In small details they represent these components. They work as a shelters for the travelers and as places for gathering together local community and organizing local events. Each of them has got a special local character which refers to its history. J2 represents logical soul in Plato’s theory. It is a small museum of the intellect, containing writing on the stones, books. J1 represents the spirited soul. The (moral) courage to stand for justice. Your action will change the space and its perception. J3 represents the appetitive soul. Hidden in between olive trees and lush vegetation, a small museum of human distraction. During day, guests might hear concerts given by grasshoppers, during night – spectacle of fireflies. Balance between extremes is the goal to achieve by appetitive soul. J4 represents justice, the balance of the souls. As the closest Jazzo to the Monte Bulgheria, it is the most exposed to the wind and the stars. Music keeps the fragile balance. In this Jazzi, it is possible to hear flutes. The aim of this shelter is to combine all of the components of the human soul into one body. It is an important place for the events. As old beliefs says, mountains were a place of nymphs and fairies. Only music helped to keep shepherds and theirs sheep save from magic. Jazzi by night: One of Plato’s most significant contributions to astronomy was his claim that these apparently irrational movements could be explained by supposing that each planet moved on not one but several circular tracks. He believed that in each disorder is a consequence which needs to be defined. There is no single trajectory that Planets are following, there is a sequence of the trajectories which are not random but logically sorted. In our concept, this approach refers to the system for looking at the sky by night. There is not only one solution, but multiple to enjoy the stars over traveler’s head. Each of them is having the same determining factor – seeing clear sky in comfortable position. We proposed the series of benches, made by natural, local materials. Benches are different, as each trajectory and viewer is different, but they have the same destination, the same pattern and order. Places for seeing the sky, they work during the day as a common meeting and relaxation space. They also serve to listen to sounds and music performed during star-gazing and other events. Events: Regular events will form the core of attraction of the region. They will form a cult around the place, a ‘must have experienced’ feeling. Examples: – Walk of 100 poems – Full Moon Opera (e.g. Monteverdi’s L’Orfeo) – Witches chants (on April 30, Notte di Valpurga) – Chess championship on Monte Bulgheria – White Dinners in Jazzi and Landscape – Baroque Pastorale Concertos – Pastoral Poetry – Pastoral Theatre (e.g. “Il pastor fido” (Gu

Plotinus, the founder of Neo-Platonism was living his late years in Campania, where he wanted to found ‘The City of Philosophers’ on an abandoned settlement, based on Plato’s theory about the ideal city. In his treatise ‘the Republic’, Plato introduced his tripartite theory of soul. The soul is composed of three parts: The logistikon (logical), the thymoeides (spirited) and the epithymetikon (appetitive). These three parts also correspond to the three classes of a society. Whether in a city or an individual, justice is declared to be the state of the whole in which each part fulfills its function without attempting to interfere in the functions of others. One of Plotinus’ greatest imprints on Western thought, is the introduction of the idea that happiness is attainable only within consciousness. Human happiness has nothing in common with the material world. Happiness depends only on humans’ consciousness and awareness of the power of mind. As a traveller, he was defining happiness as journey into ourselves and mental fight over material goods, which are only an imperfect material body projection of idealistic patterns. The proposed concept projects these major ideas of western thinking onto the competition region on the back of the ‘sleeping lioness’ (Monto Bulgheria), which sits there like a sphinx proposing conundrums. The visitor and hiker will be exposed to these concepts and initiate a self-reflection and a reflection of the individual in society. Jazzi buildings, which the traveller is discovering in his journey represent components of the human soul. Each Soul contains three parts which define its character: Logical (J2), Spirited (J1), Appetitive (J3) and the balance between each part named – Justice (J4), leading to happiness. Thematically ordered walkways lead to the Jazzi. As in Plato’s theory, they are different and separated by the meaning, nevertheless together they are connected by consciousness and creating one soul.

OBIETTIVI
The goal of the project is to attract tourists into the region and in the same time, keep the mysterious, natural character, typical to this location. In the world of philosophers like Plato and Plotinus, the thought matters, not the material. Travelers surrounded by nature and historic jazzi traditionally used by shepherds, will feel moved back in time, but also in an authentic mediterranean environment, the cradle of philosophy and western culture. People overwhelmed by media, telephones, internet, are becoming slaves of the tools that were supposed to serve them. Apparent individuality through social media leads paradoxically to a loss of self-understanding and individualism. Rare areas, like National Parks in Camerota, with their natural virgin character bring a fresh breath for visitors coming from all busy cities. Intruders have to respect the rules of this inner world, while crossing its borders. The Park of the Three Souls does not offer ‘distraction’, but ‘concentration’ on the inner self in a playful way. It serves the need for ‘grounding’, ‘back to nature’ and calmness of the modern human. Time here is relevant, human day-circle should be dependent externally on the nature and internally on the mind only. The Jazzi serve as minimalistic concept museums and event spaces. A series of events through the year serves to attract special visitors and creating on the long term a ‘cult’ of the region. A further incentive to explore the Park of the Three Souls are small interventions along the paths, which challenge the different souls. Minimal interventions and quests should ensure the basic livelihood. Main attraction of the jazzi is to experience the philosophical and traditional spirituality which refers to this this region. Here people might listen old legends and beliefs, reflect about the Plato and Plotinus theories and eat simply shepherds’ food. Time stopped while they decided to follow this trail.

The proposed concept is by purpose ‘low-tech’, but ‘high-spirit’. Traditional materials will be used, like stones from the site, wood or simple metals, where needed. Jazzi will be fixed as necessary to stop their further decline. Engraving into stones will be made with laser cutters. Proposed sculptures will also employ traditional materials, which are aging nicely. They could be developed and built with local arts and crafts school and/or universities. Collaborations can be made with e.g. University of Salerno – Faculty of Arts and Philosophy. When energy is needed for illumination or some low energy electronic sound elements it will be gained by solar cells.

Jazzi Repair costs and outfit 50’000 EUR Walkways (Safety repair, signposts etc) 10’000 EUR Associazione Jazzi – 3 / 4 – 17.10.2016 Sculptures and Objects 150’000 EUR Event Infrastructure 10’000 EUR Info & Graphics 10’000 EUR Fees (Execution Design, Art Direction) 30’000 EUR Total 260’000 EUR The cost estimate is done on the minimum information provided on existing infrastructure.
It rather represents the lower end of costs, but many things in the concept are also scalable in magnitude and time. It could be started with a minimum version and as more and more visitors come, be expanded over time.

Maintenance Cost Estimate: Jazzi, Walkways, Objects Maintenance 10’000 EUR per year We propose to employ a shepard on site to take over the maintenance. He would lead his sheep over the park and perform necessary maintenance works and little repairs on spot. His payment for maintenance would allow to subsidize him keeping the sheep. The sheep products (Milk, cheese, Wool) can be sold to tourists.

Income Estimate: Renting Jazzi for overnight stay 30’000 EUR per year Selling local products to visitors/members 40’000 EUR per year Events profits 60’000 EUR per year Total 130’000 EUR per year Events should be self-carrying if not generating profits, which can be used for the park. The park may organise as a society with international membership. Members may get cheaper overnight stays and access to member only exclusivities. Olive oil and other products of the region may only be sold to members raising their exclusivity. Three types of olives oils and wines could be generated, representing Plato’s souls. Special fragances made out of local herbs could also represent the soul types. The proposed concepts contains a key to an intelligent international marketing concept for regional products, which could bring a steady income for the park and region, independent of weather and tourists. Consumers today like products with a story and a concept behind. 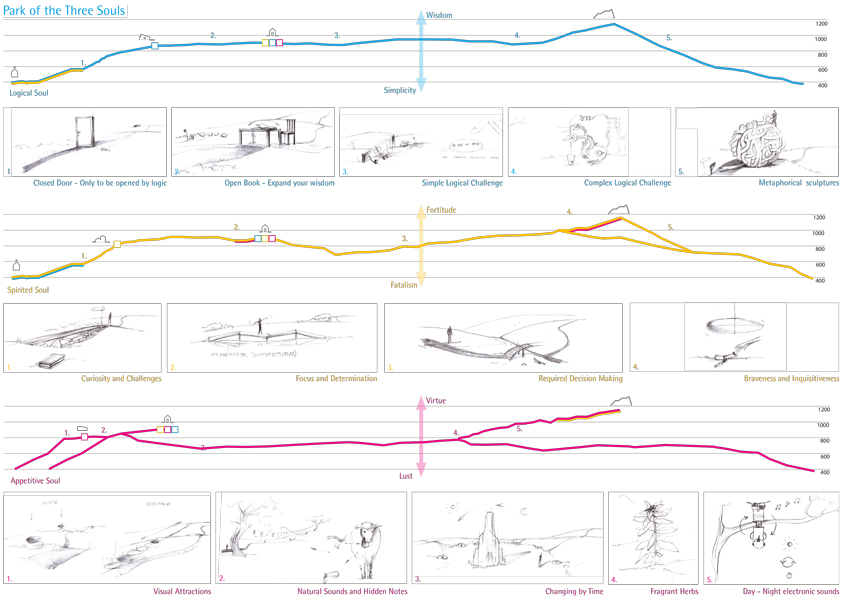 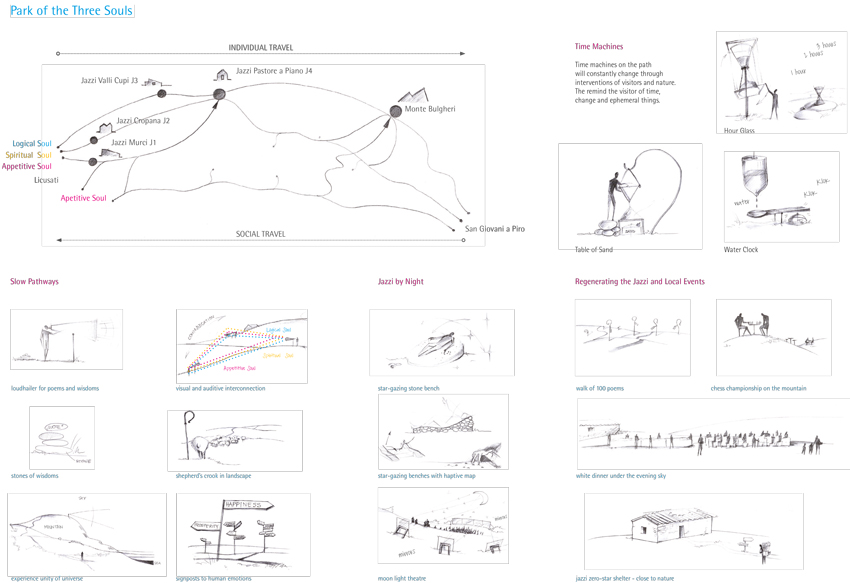